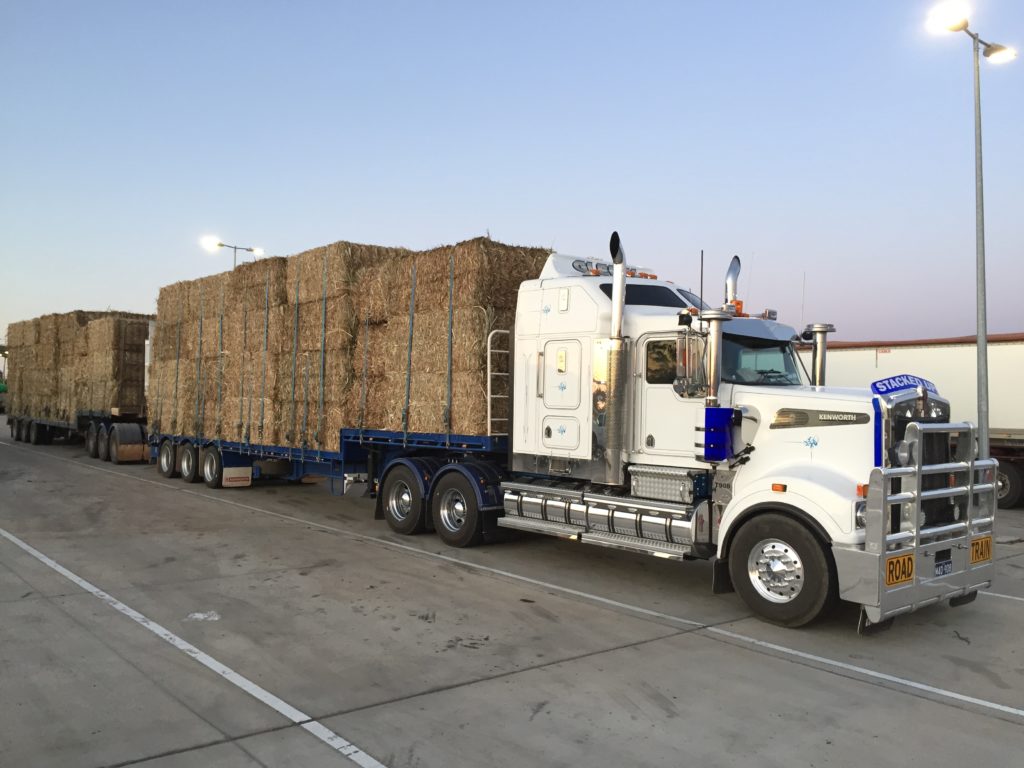 Bales of sugar cane tops ready to be distributed to farmers from Feed Central’s head office in Toowoomba.

Supplier Feed Central is scouring farms across Australia to purchase cane tops and pasture which will then be advertised and sold to their long term and drought-affected clients.

Meanwhile, a Burdekin cane farmer has been sending his own uncontracted cane west to a nearby drought-affected property to be used as cattle feed.

Last month, Mr Dametto called on Federal and State governments to purchase emergency supplies of liquid supplements and sugar cane to replace dwindling supplies of hay, cotton seed and other supplements which are quickly being exhausted on farms.

“While the State or Federal Governments haven’t acted on this suggestion, I’m thrilled that feed suppliers and farmers have taken their own separate initiatives to develop commercial arrangements which benefit all parties,” the Katter’s Australian Party MP said.

“This is an example of agricultural innovation and an effective response to the drought crisis. It not only benefits the local economy but keeps cattle properties sustainable in the hard times.”

Feed Central managing director Tim Ford said the idea for his company’s initiative, known as “The Great Aussie Fodder Hunt”, came from a national shortage of hay which has left drought-affected farmers in a precarious position.

“It’s just an absolute necessity for feed, and particularly roughage, which fills a gap in the market due to this drought,” he said.

“If someone has something they think would make reasonable hay or fodder, it might be sugar cane tops or a paddock of grass, they should contact us because what wouldn’t normally work in the market could quite easily work at the moment as a substitute.”

Mr Ford urged growers in the North to get in touch with Feed Central if they had sugar cane tops, pasture or other suitable alternative crops which could be used to make hay.

“There’s an acute shortage nationwide of hay so it’s an opportunity to make a dollar and also help somebody out further south,” he said.

“The sugar tops have been well received and there may even be potential for those post-drought as a source of roughage.

“If growers have an idea about another crop which can get into a bale to make reasonable quality fodder, we want to talk about it. Tell us what you’ve got in mind and we’ll see whether we can make it work.”

Co-chairman of the Pioneer Cane Growers Organisation in North Queensland Dean Sgroi said he had been sending cane to be used as feed on cattle properties “on and off” for the last 10 years.

After fielding a chance phone call a few weeks ago from a Charters Towers cattle producer who happened to be a past customer of his, Mr Sgroi began sending out small loads of uncontracted cane.

“At that point, we hadn’t really been considering supplying cane to be used as cattle fodder again but when we saw there was maybe some demand, we started looking into it a bit further again,” he said.

Mr Sgroi said he would continue to supply cane to be used as cattle fodder “while the demand was there”.

“Feed is not readily available and cattle producers need something to sustain their herd,” he said.

“We’re selling it direct, producer to producer. I do understand there are other growers who are advertising their cane for cattle fodder.”
Currently, 98 per cent of New South Wales and almost two thirds of Queensland is either in drought or is drought-affected.

Producers who think they may have crops suitable for hay production can get in touch with Feed Central on 1300 669 429 or by visiting www.feedcentral.com.au