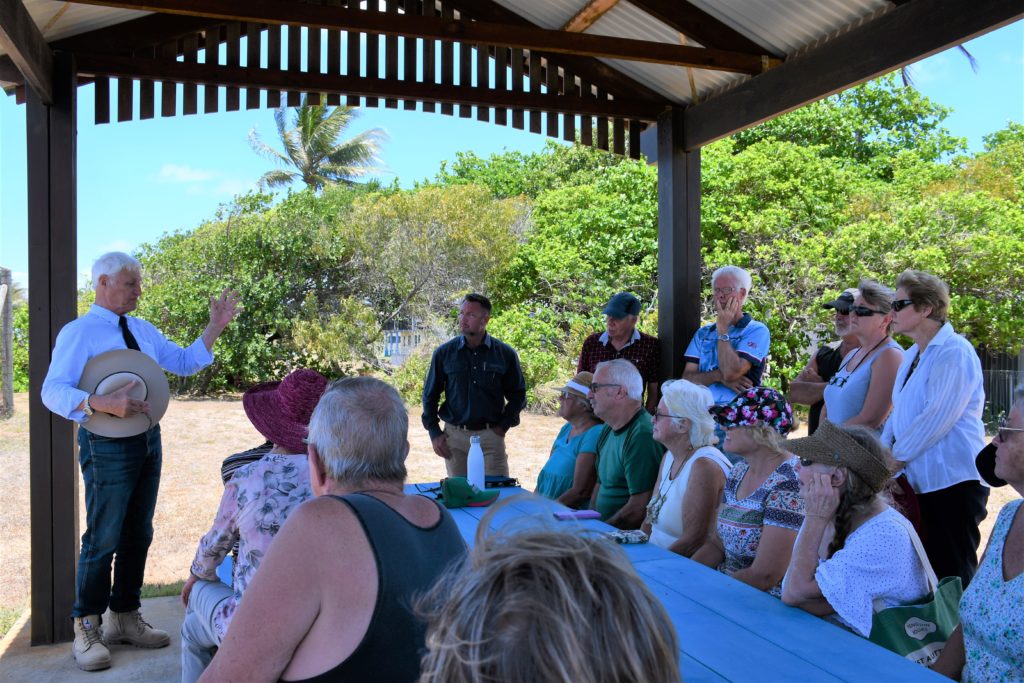 FEDERAL Member for Kennedy Bob Katter MP and State Member for Hinchinbrook Nick Dametto MP are “sending out an SOS to the nation” today, calling on Telstra to resolve the long-standing connectivity issues in Forrest Beach.

Their press conference on the topic, supported by Forrest Beach residents who can’t make calls or send texts in their own home, is their last-ditch attempt to rectify the service before they resort to a “message in a bottle” to communicate; a technique famously used by English rock band The Police.

“Forrest Beach is sending out an SOS,” Mr Katter chorused, in an off pitch but familiar melody.

For the past month Forrest Beach residents have experienced connectivity issues where Telstra customers are unable to connect to 3G.

Telstra recently claimed to have resolved the issue, but residents are still experiencing poor service and at times only have SOS in their homes.

Hinchinbrook MP Nick Dametto said many constituents have contacted my office frustrated and they have every right to be, it’s been going on for over a month.

“There’s home-based businesses that are missing calls from potential customers because calls go straight to message bank,” he said.

“It’s causing major safety concerns for the elderly because if they need to contact family, doctors or emergency services because most phone calls drop out or the receiver of the call can’t hear them properly.

“I can’t help but wonder what the situation will be like if Telstra starts phasing out 3G – 4G and 5G is basically non-existent at Forrest Beach, any reduction in service capabilities would result in Forrest Beach going back to the dark ages.

“My constituents have been paying for a service and they have had nothing but problems, Telstra needs to step it up.”

Kennedy MP Bob Katter called on Telstra, Optus, and the Federal Government to alleviate the telecommunications problems in Forrest Beach.

“I can’t be too critical of the Federal Government and Telstra as this year we’ve had 20-plus new mobile phone towers funded in the Kennedy Electorate,” Mr Katter said.

“However, a lot of that funding goes to the outback areas – whilst there are problems in the vast outback areas with mobile coverage, the major problems are actually on the coast.

“These areas get heavy rainfall which adds a different complexity to the situation as well.

“Telecommunications is the number one issue in the electorate. These days you need it for business, study, and play, and of course in emergencies. It is as essential as roads and electricity.”

Forest Beach resident, Glenn Tardiani, has an earthmoving and maintenance business that he says has been significantly impacted by ongoing poor service.

“I’ve lived here for 13 years and the service has not been acceptable at any point; I only get one or two bars at best, and that’s on 4G.

“I’ve contacted Telstra on three or four occasions to notify them of this and it hasn’t been resolved. We’ve missed phone calls due to poor service and the internet drops out at any time.

“Since we’ve notified Bob Katter, Telstra has contacted me with a text message promising to make contact and they never did.

“This is huge corporation and it’s not good enough. They should be giving us the service we are paying for.

“In Forest Beach, we feel abandoned. You go up the road to Ingham and you get perfect service but we have to live with SOS, and one or two bars.”

Mr Tardiani said that Telstra’s proposal to boost the 3G and 4G service with boosters was expensive and impractical for business as well as the elderly residents.

“I have a neighbour who runs a small business and Telstra advised him to put on a booster. He relies on his mobile service for customers. And he still loses his reception.

“It’s unacceptable that Telstra are expecting us to upgrade our phones to 4G. The people that have 3G phones shouldn’t be penalised because they are taking out the 3G network. I have 4G and I have the same issues. They say it is perfectly fine but it’s not – it’s useless.”

“Residents are bound by Telstra. They can’t just “switch to Optus” because they have their businesses with Telstra, their internet and EFTPOS. Telstra needs to sort it out.”

The Katter’s Australian Party is urging Telstra to permanently resolve the connectivity issues rather than the current method of what appears to be temporary solutions to the problem.